Father of Big Brother?
The following text is an idea which I circulated freely to many people in broadcast TV firstly in 1989
I just sometimes wonder whether it sparked off the idea for Big Brother.
I certainly got the genre right!

This programme is designed mainly for the younger audience, late teens to early twenties. This age group is attracted to drama which is about or set in tight and recognisable communities and having a sense of reality.

The basis of this idea is to produce a programme where the dividing line between reality and fiction becomes increasingly blurred with the techniques of fly on the wall documentary being applied to a soap type programme. While a fully scripted drama would fit this criteria, the thrust of this idea is to use actual events as part of the story lines.

This soap type programme is centred around a single house where a number of young professional, but not necessarily middle class, people live. The occupations of these characters can be loosely categorised as being involved in the media which includes television, journalism, the arts and, even, business and politics.

The character inside the house would be fiction while the character at work would be fact. For example, the junior press officer to the Conservative/Labour/SDP party would actually do, and be filmed doing, that job or the trainee journalist would work for The Socialist Worker/The Sun.

The actors would, therefore, be as much selected by their acting ability as by the ability to undertake the character's occupation in real life. I do not see any great difficulty in persuading organisations to participate in this idea as the publicity value would surely outweigh any administration cost, nor do I foresee particular difficulties with Equity or other unions.

I have a basic outline of the 'in-house' story lines and characters plus some initial ideas for the fact parts but the way stories progress would be very much dependent on the factual events. Equally, the amount of screen time to either would depend on real events such as if the pop video assistant director gets a job on the new Jackson video then the actuality of her work will be featured rather than the on-going story of her attempts to find her real mother.

The following jpgs are copies of the actual document distributed. The copyright dates are accurate as I have both the original time sealed ideas book and all the original rejection letters from 1989 onwards 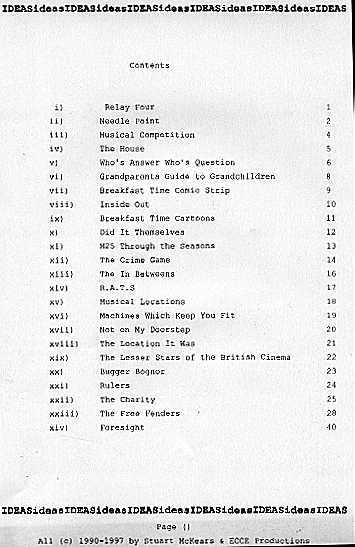